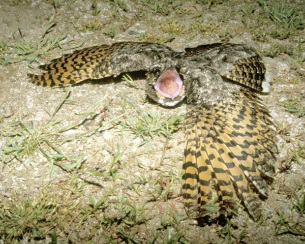 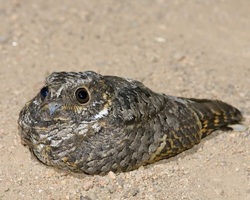 What is the Poor-will?
The small owl-like  Common Poor-will is the only known bird to hibernate. During the winter when its diet of flying insects becomes scarce instead of migrating to a warmer climate like most birds do, the Poor-wills metabolic rates will drop so that  it can so that it can survive several weeks or months without eating. Their body temperature can drop as low as 40 degrees Fahrenheit and its respiration can decrease up to 90%.
Physiological Effects

Lives in dry, grassy and open areas. found in the western United States where it is typically dry and arid. They have also been reported to live in colder areas such as Colorado and parts of Canada. During hibernation the Poor-will will hide in a hollow log or in a patch of grass.

The Poor-will breeding season is in early may - early September. These birds are monogamous, so they will only have one mate at any given time.  It nests on the ground and both parents will aggressively protect their eggs and incubate them. The Poor-will can be identified by it's hissing sound that it makes while warning nearby intruders. A female Poor-will can have up to 2 clutches a year one in late May to June and another in August. Since Poor-wills hibernate during the winter they breed during the remaining time of the year.

The Poor-will is an insectivore meaning it only feeds on insects such as grasshoppers, crickets, worms, moths, and beetles. When the Poor-will goes for a few days without eating it's metabolism drops allowing it to conserve energy by going into Torpor. Before the winter season Poor-wills will consume excess amounts of insects to put make extra body fat. This body fat is used as an energy source during hibernation. 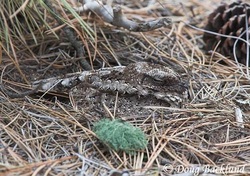 -Common Poor-will was not only the very first bird to be discovered to hibernate but it is also, is the only known species of bird to do so. Other birds are known to go into torpor (hibernating for short spurts of time) but none do so long enough to considered hibernation.

- Hopi Native Americans were aware of the birds hibernating habits. They even called the bird "the sleeping one"